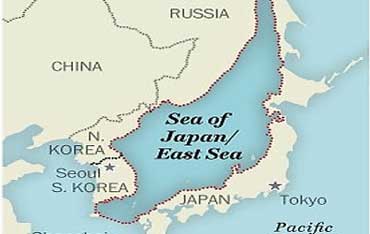 Koreans believe it’s important to teach the historic background on why the water is more widely known as the Sea of Japan than its original name, the East Sea. (Korea Times file)

WASHINGTON (Yonhap) — The U.S. state of Virginia has revised the guidelines for history and social science education in line with a newly enacted law that requires textbooks to use the Korean name “East Sea” alongside the Japanese name “Sea of Japan” for the body of water between the two countries.
The Virginia Department of Education is collecting public opinions until Dec. 21 on the revised 2015 History and Social Science Standards of Learning Curriculum Framework that will serve as the guidelines for new textbooks to be used beginning in 2017.

The new guidelines reflected the landmark legislation requiring the use of both the East Sea and the Sea of Japan together. The legislation passed through the Virginia House of Delegates in February, and Virginia is the first U.S. state to take such action on the issue.

The new framework, which is revised every seven years and last revised in 2008, mentioned the East Sea issue as it calls for students to understand how different cultures use maps and place names to reflect their regional perspectives.

It also calls for students to analyze the characteristics of the East Asian region by describing major physical and environmental features.

Koreans believe it’s important to teach the historic background on why the water is more widely known as the Sea of Japan than its original name, the East Sea. They say it’s just a relic of Japan’s imperialistic past, including the 1910-45 colonization of Korea.