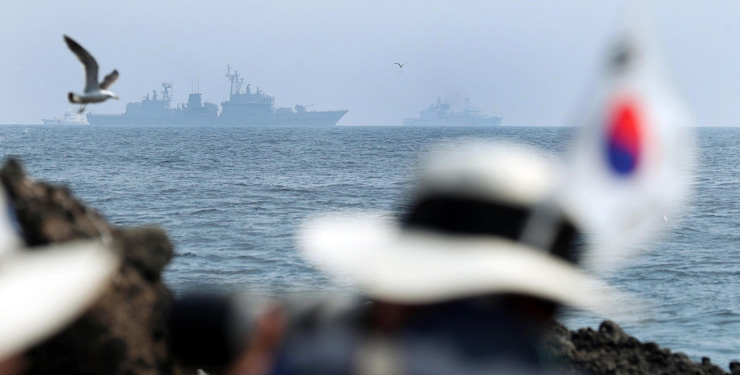 The Navy began a regular exercise for the defense of the nation’s easternmost islets of Dokdo, Thursday, prompting a strong protest from Japan.

The Navy said that it was conducting the two-day exercise through today to defend Dokdo from possible aggression by outside forces, virtually referring to Japan that continues to make territorial claims over the islets in the East Sea.

The training will involve seven ships from the Navy and the Korea Coast Guard including the 3,200-ton Gwanggaeto the Great destroyer, and four naval and Air Force aircraft with a P-3C maritime patrol plane and a F-15K fighter jet.

A unit of the Korean Marine Corps, which is based in Pohang, North Gyeongsang Province, will conduct a landing drill on the islets, the Navy said.

“The exercise will be similar to those of previous years in size,” a Navy officer said. “It is based on a scenario that the Marine Corps will repel an outside force when it attempts to occupy Dokdo.”

Korea has conducted the Dokdo defense drill twice a year since 1986, with the Navy, Korea Coast Guard and Air Force participating. This is the first drill since President Moon Jae-in took office.

For every exercise, however, Japan, which claims Dokdo is part of its territory, has protested, and the Japanese government again expressed regret over the drill this time.

Kenji Kanasugi, director-general of the Japanese Foreign Ministry’s Asian and Oceanian Affairs Bureau, told a Korean official at the Korean Embassy in Japan that the Japanese government could not accept the drill on Takeshima, the Japanese name for Dokdo, in light of its stance on the sovereignty over the islets, according to Kyodo News.

Kanasugi also said it was regretful that Korea launched the exercise despite Japan’s prior demand to halt it, according to another report by NHK. The broadcaster reported that the Japanese Embassy in Seoul also delivered the same message to the South Korean foreign ministry.

But the Korean Navy said there is nothing wrong with the exercise.

“Dokdo is South Korean territory. It is a regular drill to protect our territory, so it is a must,” said spokesman Jang Wook.

In the meantime, it was found earlier that the Japanese government is asking its citizens abroad to contact Japanese diplomatic missions if they find maps describing the islets as Dokdo instead of Takeshima, in a bid to “correct” the labeling.

It also requested similar reports for maps describing the sea between Korea and Japan as “the East Sea,” a name preferred by Korea, instead of “the Sea of Japan.”