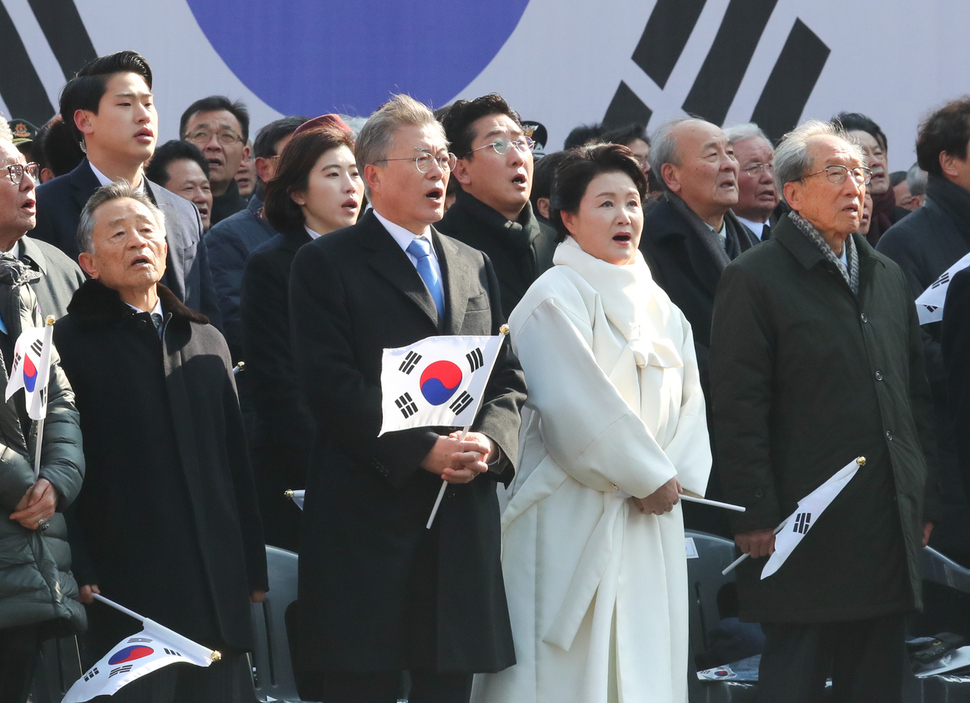 South Korean President Moon Jae-in did not make any specific mention of inter-Korean relations in his congratulatory address on March 1, a holiday marking the Korean independence movement launched on that day in 1919. Instead, he said, “We will make the 100th anniversary of the March 1 Movement and the foundation of the Republic of Korea a new starting point for establishing a permanent peace and for prosperity that is based on peace. As we move forward to 100 years of liberation, we must complete a peaceful community and an economic community on the Korean Peninsula.”With rapid progress being made on inter-Korean relations during the Pyeongchang Winter Olympics, there are multiple reasons that Moon once again brought up the completion of “a peaceful community and an economic community on the Korean Peninsula.” This vision originally appeared in his plan for “a new economic map for the Korean Peninsula,” a blueprint for governing which he outlined during the Liberation Day holiday in 2015, when he was the leader of the New Politics Alliance for Democracy (currently called the Democratic Party).While unveiling this plan, Moon said, “When progress is made on the North Korean issue and the appropriate conditions are in place, I will work on redrawing the economic map of the Korean Peninsula. South and North Korea, which are split by the military demarcation line, will be rejoined by an economic belt, and an economic community will be achieved in which both sides can thrive.”Most of all, Moon’s remarks during his congratulatory address strongly conveyed his determination to take the lead in tackling the challenges currently facing the Korean Peninsula. “We no longer need to humble ourselves. We have a proud history of achieving liberation through our own power. We have the capacity to make peace by ourselves,” he said.Moon’s remarks further read as a pledge to produce visible results in inter-Korean relations and North Korea-US dialogue and enlist the public’s support in ensuring that Korea’s division does not hinder peace and prosperity on the Korean Peninsula in the year leading up to the centennial.“We must see to it that division no longer serves an obstacle to our peace and prosperity,” he said in his Mar. 1 address.“Today I propose to the people that we realize this goal together,” he added.A senior Blue House official explained that Moon was “proposing to regard the hundredth anniversary of the March 1 Movement next year as a starting point for a permanent peace, and to make it our goal to overcome division and establish a peace and economic community of the Korean Peninsula by the hundredth anniversary of liberation [in 2045].”Moon’s remarks also expressed his intent to actively pursue a “new economic map” for the peninsula if visible progress is made in North Korea-US dialogue and resolution of the nuclear issue.Moon’s new economic map vision specifically involves integrating the South and North Korean markets into a single Korean Peninsula economic zone to be developed in three economic belts (energy and resources in the East Sea region; industry, distribution, and transportation in the West Sea region; and environment and tourism in the East Sea/DMZ region), which are to be linked with the northern economy to establish a hub for economic cooperation in Northeast Asia.