Home A journey to the East Sea by high-speed train : New KTX line makes Gangneung’s wonders all the more accessible

A journey to the East Sea by high-speed train : New KTX line makes Gangneung’s wonders all the more accessible

GANGNEUNG, Gangwon – Before the opening of the KTX line to Gangneung, Seoulites who wanted to visit this seaside city on Korea’s eastern coast would have had to drive three hours by car or ride six hours on a train.

Those days are in the past with the new express line that takes passengers from Seoul Station to Gangneung Station in less than two hours for 27,600 won ($25.40). The Gyeonggang Line will open on Dec. 22 in time for the 2018 PyeongChang Winter Olympics. 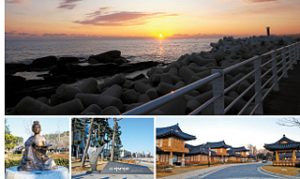 Top: The sunrise view from Sodol Adeul Bawi Park. Bottom left: A statue of Heo Nanseolheon at the home of the prominent Heo family. Her brother, Heo Gyun, is the author of the “Tale of Hong Gil-dong.” Bottom middle: Gangneung’s Coffee Street is filled with cafes. The region’s quality water is said to make the best coffee. Bottom right: The Ojuk Hanok Village, where homes are built in the traditional Korean style known as hanok.

The line will run through all the Olympic host sites, including Pyeongchang, Jinbu and the last stop, Gangneung. There will be 18 trains per day during the week and 26 on weekends, with extended service during the Olympics. Up to 51 trains will run daily in February during the Games. For those interested in getting to Gangwon on Feb. 9, the day of the opening ceremony, train tickets will go on sale from Dec. 9.

Last week, I had the opportunity to ride the new KTX train during its trial run. The trip was hosted by the city government of Gangneung and Korail, the nation’s rail operator.

After arriving at Gangneung Station from Seoul, I boarded a shuttle bus departing for Jeongdongjin Station on the hour. The fare was 2,000 won, and the trip took 30 minutes.

Jeongdongjin Station is Gangneung’s gateway to the sea. A specially-built train fittingly called the Sea Train runs along the shoreline for about 58 kilometers (36 miles), offering riders panoramic views of Korea’s eastern coast.

The train has various seating arrangements for groups of all sizes, including family boxes that can fit four people and “sweet boxes” for couples. Larger group can sit together in a row. Solo travelers need not fret – there are individual seats as well. Sea Train ticket prices range from 13,000 won for a single seat to 50,000 won for four-person boxes.

I opted to ride the train from Jeongdongjin and back, a journey that took about 40 minutes. What makes the train special is its focus on the passenger experience. Whenever we passed a picturesque site, the driver kindly gave us a heads-up to get our cameras ready. The ocean views were, of course, impeccable, and there was even a boat-shaped museum called Unification Park. Truly, this train ride was about the journey, not the destination.

My next stop was Badabuchae-gil Trail, a 3-kilometer path that snakes along the rocky shore between the harbors of Jeongdong and Simgok.

Walking on the well-paved course, I had never felt closer to the beach. The waves lapped the pavement, and the splendid rocks offered endless pleasure for adventurous trekkers.

Members of the Korean Army and Coast Guard are stationed along the trail because of the location’s strategic importance near the Korean border, so certain parts leading away from the trail are off-limits. In fact, it has been only four years since the trail was open to the public. The entrance fee is 3,000 won, and the trail might be closed if the weather is bad or if there are military operations.

As the sun began to set and the sky faded to twilight, I made my way over to the Ojuk Hanok Village, where I would be staying the night.

The village’s homes are built in the traditional Korean style known as hanok with exquisite gambrel roofs laced with tiles and a Korean-style wooden entrance known as maru.

Being a traditional home, guests are also encouraged to sleep in the traditional manner. There are no beds in the village, only soft blankets laid on a warm floor, and of course, shoes are forbidden inside. Daily rates range from 50,000 won for small two-person rooms to 220,000 won for large six-person rooms.

Opposite the village is the birthplace of Korea’s greatest maternal figure, Shin Saimdang, whose face graces the 50,000 won bill. The house, Ojukheon, is where she gave birth to Yi I, considered one of the finest scholars of the Joseon Dynasty (1392-1910). Yi’s face appears on the 5,000 won bill.

After a good night’s rest, I got up at 6 a.m. to catch a bus in time to see Gangneung’s famous sunrise. Some of the best spots include Gyeongpo, Jeongdongjin Beach and Sodol Adeul Bawi Park.

I opted for Adeul Bawi, which literally translates to “son rock.” There is a legend that an old couple who couldn’t have children came to this rock and prayed for 100 days. Afterward, they were miraculously bequeathed a son.

Though it was early in the morning, there were already a few fishing boats out at sea. A red lighthouse was visible in the distance, along with some jagged rocks popping out from the water. The wind was a strong morning gust. At about half past seven, the sun finally showed its golden rays.

Looking for some respite from the cold, I headed to Gangneung’s Coffee Street at Anmok Beach for a cup of the city’s specialty: Gangneung coffee.

Since the Shilla Dynasty (57 B.C. to A.D. 935), tea culture has flourished in Gangneung, as the region’s water is said to be of high quality. During the early 19th century, coffee culture took hold, and Korea’s literati started drinking espresso brews. They gathered in cafes to work on pieces and share ideas. Gangneung, being home to many literary figures, became a center for Korean coffee culture.

Gangneung’s Coffee Street is a refreshing respite from the city blocks of Seoul. Here, there are more independent cafes than franchises. After having a warm latte, I moved on to my final stop in Gangneung, the birthplace of five prominent writers of the Joseon Dynasty: Heo Yup, better known by his pen name Chodang, his three sons, Gyun, Bong and Seong, and his only daughter Nanseolheon. Of them, Heo Gyun may be the most famous in Korea, best known as author of the 1612 “Tale of Hong Gil-dong.”

Like the hanok village, the home of the Heos was built in traditional Korean style, and the buildings have retained their characteristics without a single breath of modernity. The houses are strictly divided into spaces for male and female family members, reflecting the Joseon Dynasty’s adherence to Confucian beliefs. A well outside the house was shared with other neighbors in communal fashion.

After a long day, I made my way back to Gangneung Station for the two-hour KTX ride back to Seoul. I cannot imagine how exhausted I would have been had the journey taken any longer.