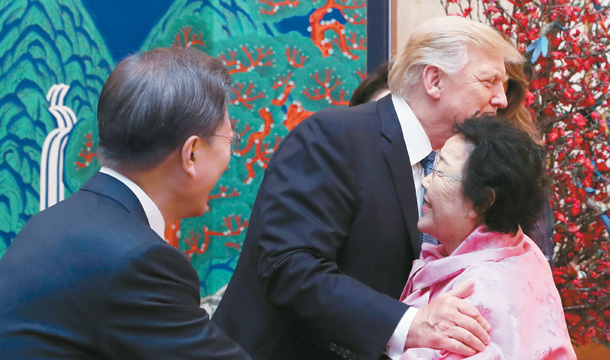 In perhaps the most iconic picture during his trip to Korea, U.S. President Donald Trump was photographed embracing a victim of Japan’s wartime sexual slavery during the state banquet with President Moon Jae-in on Tuesday.

Lee Yong-soo, an 89-year-old Korean survivor, was invited to the dinner banquet hosted at the Blue House to mark Trump’s two-day state visit, attended by over 100 people from the two countries, including leaders of Korea’s military, business, academic, cultural and sports communities. Lee had a brief encounter with the U.S. president, smiling up at Trump as he gave her a hug, with Moon watching from the side.

Lee has been a longtime activist who has spread global awareness of the plight of so-called comfort women – young women and girls, many of them Korean, who were forced into sexual slavery by the Imperial Japanese Army before and during World War II and made to serve in military brothels throughout Asia.

In 2007, Lee was among three comfort women who testified in front of the U.S. Congress, which led to the unanimous passing of House Resolution 121 later that year, urging the Japanese government to acknowledge and officially apologize for forcing women into sexual slavery.

A photograph of the moment was shared on the Blue House’s Facebook account with a series of pictures from Trump’s visit, along with the comment, “At the state dinner, the two leaders greeted each and every guest that entered the banquet floor. President Trump is seen embracing grandmother Lee Yong-soo, the real-life protagonist of the film ‘I Can Speak.’”

The acclaimed 2017 Korean film starts off as a light comedy but quickly delves into the protagonist’s past as a wartime sex slave and her motivation to study English.

The dinner also served shrimp from Korea’s Dokdo islets in the East Sea, known as Takeshima in Japan. Sankei Shimbun said Korea is “throwing cold water on the close ties between the U.S. and Japan” by stirring up issues between Korea and Japan to get closer with the United States.

Japanese officials expressed confusion and frustration over the decision to reference such a sensitive issue at a time when trilateral relations are so crucial to regional security, Kyodo News Agency reported.

“I wonder about that,” Japanese Chief Cabinet Secretary Yoshihide Suga said about the use of the shrimp. “At a time when stronger coordination between Japan, the United States and South Korea is required to deal with the North Korea issue, there is a need to avoid making moves that could negatively affect close coordination” between Seoul, Tokyo and Washington.

Suga also said Tokyo will continue to appeal to Seoul to steadily implement the Dec. 28, 2015, deal between Korea and Japan to resolve the comfort women issue, which included an apology by the Japanese government and a payment of 1 billion yen ($8.79 million) for the victims.

But some survivors and civic organizations have not accepted the agreement, claiming Japan needs to take clearer legal responsibility and offer more formal reparations.

Lee, a Daegu native, has said she was taken by Japanese soldiers as a teenager in 1944 and forced to serve as a sex slave at a Japanese army unit in Taiwan. She has also been an ardent participant in the weekly Wednesday demonstrations for comfort women victims, held in front of the Japanese Embassy in central Seoul.