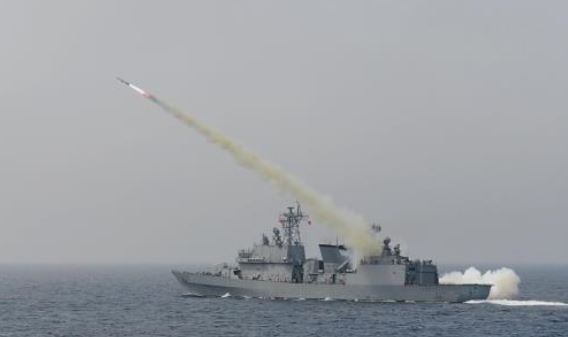 South Korea’s Navy said Tuesday it has conducted massive live-fire drills in the East Sea in a show of its resolve to retaliate against North Korea’s provocations.

Among assets mobilized were the 2,500-ton Gangwon frigate, a 1,000-ton patrol ship, 400-ton guided-missile vessels and 130-ton high-speed boats, according to the Navy.

“The training this time is aimed at improving our military’s immediate response posture against the enemy’s naval provocation,” Capt. Choi Young-chan, commander of the 13th Maritime Battle Group, said. “If the enemy provokes anywhere, whether on or under water, we will immediately hit back and bury them at sea.”

The maneuver came two days after the North carried out its sixth nuclear test, claiming it used a hydrogen bomb.

The Navy also plans to hold four-day battle group training from Wednesday in the country’s southern waters. It would involve more than 10 ships including the 2,500-ton Chungbuk frigate and submarine, as well as the P-3C Orion maritime surveillance aircraft and Lynx multi-role planes.

The Air Force’s F-15K fighter jets and a CN-235 transport plane will also join it, added the Navy.

Separately, South Korea and the US are scheduled to hold anti-submarine warfare practice in the East Sea on Thursday and Friday.