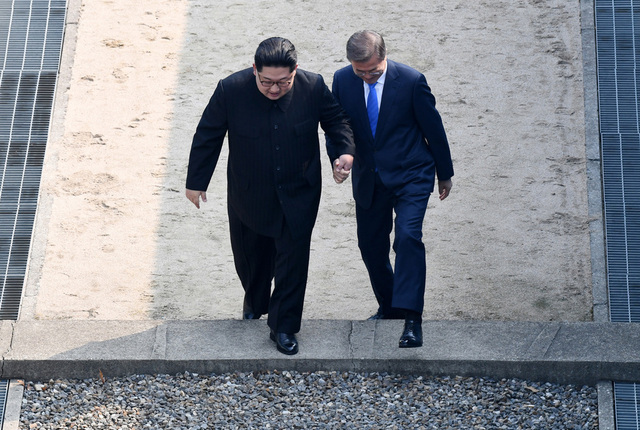 In the Panmunjeom Declaration released on Apr. 27, South Korean President Moon Jae-in and North Korean leader Kim Jong-un affirmed that they would work together to ease inter-Korean tensions in military affairs by completely halting all hostile activity, setting up “waters of peace” around the Northern Limit Line (NLL), providing a military guarantee for inter-Korean exchange and taking gradual steps toward disarmament.First, the two leaders promised “to completely cease all hostile acts against each other in every domain, including land, air and sea, that are the source of military tension and conflict.” With some cosmetic changes, language about the cessation of hostile acts between South and North Korea has appeared in nearly every major inter-Korean agreement since the July 4 Joint Statement in 1972 (the first inter-Korean agreement), including the Inter-Korean Basic Agreement in Dec. 1991 and the Oct. 4 Summit Statement in 2007. Even so, the fact that the two leaders reconfirmed the principle of the cessation of hostile acts appears to express the political will to properly implement previous agreements.More “An agreement [on GPs and heavy weapon withdrawals] isn’t going to be easy, with South and North differing on what they see ‘GP’ as referring to,” a military official said.But the same official noted, “South and North have the experience of creating a road by turning the Military Demarcation Line (MDL) at the East Sea and West Sea railway lines into a mine-free, troop-free, weapon-free zone.”“It wouldn’t be out of the question for them to parlay that experience into some step-by-step approach tailored to the situation,” the official suggested.Private sector exchanges and inter-Korean cooperation measures adopted The two sides also agreed to adopt military guarantee measures based on mutual cooperation, exchanges, visits, and contacts. The measures are intended to provide support for private sector exchanges and cooperation between them.“The fact that North Korean and South Korean visitors were able to go back and forth over the Gyeongui railway line land route and the East Sea route without any